Welcome to our Represent Your NFL Team Tournament 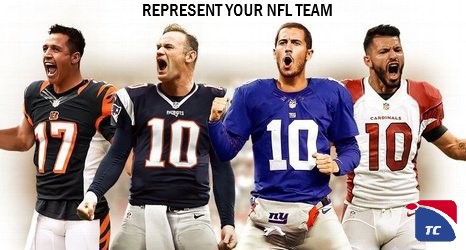 This is the third time we have presented this tournament and we are bringing it back by demand.

Each team is grouped by players who are representing the same NFL Team. Our usual suspects are the Vikings, Packers, and Bears we also have an AFC and NFC Pro Bowl team set aside for players who are representing a team that is not a popular one in the Twin Cities (Dolphins, Bengals, 49ners have been represented in the past) It does not matter if the jersey that you wear is a home or away jersey as long as it represents that team.  If you don't have a jersey then you at a minimum must match the colors but we highly recommend sporting a team shirt or jersey.

Creative jerseys are also welcome as we have had Shane Falco of the Replacements, and Bobby Bouche' of waterboy play on AFC and NFC Probowl teams.

Ultimately the spirit of this event is to simply have fun and represent your NFL Team.

The Tournament Set up:

4 Game Minimum for all teams!

Each team will play 3 pool play games of 30 minutes, (Two 14 minute halves) running time in the first half with stoppage only occurring in the second half in the final 2 minutes of the game. Teams will have 2 timeouts per game.  No OT rules in pool play.

All teams will move into our single-elimination round based upon their standings in pool play. ( Wins - Losses - Points Against)

In single-elimination, the rounds will be 22-minute halves with 3 timeouts per game, clock stoppage in the final two minutes.

If there is an OT both teams have 4 plays to score the length of the field, if they do not score then its the team that has moved the ball furthest down the field.  If Team A scores Team B must convert on PAT higher than Team A to win.

All rules are played in accordance with TC Flag Football Fall 2020 rules.

All games are officiated by a minimum of 2 officials.

Select an option to continue with the registration.